I went into the race with some confidence that I could finish the distance and do somewhat well with my time. The plan was to try to run consistently 1:20 to 1:30 for each of the five 8 mile laps until I was forced to slow down because of fatigue. My training hasn't been as consistent as it was before the TARC Fall Classic which was a race that I had on my radar for a long time. I ended up signing up on the waitlist for the TARC Fells race in late October and got in right away, quickly it became time to actually focus on running a 40 mile race.

After a planned layoff for 10 days in early November, I struggled for a week or two to get some speed back in my routine, then began to add on some longer runs. I felt pretty optimistic after running a semi-hilly 21 mile run at 8:15/mile pace on a favorite trail near my house. This course is a section of forest roads along the Wachusett Reservoir that Justin Contois and I used to run when he lived nearby, and I decided to do the 10 mile out and back twice to make the distance count as a long run.

The race consists of five 8 mile loops on the rocky Skyline trail in Middlesex Fells Reservation, race info here,.  Runners can choose to run the loop clockwise, counterclockwise, or alternate between the two directions - then come in and check in at the start/finish aid station.  There are no significant climbs, but many small ups and downs that total about 750' of gain along each lap. I ran an 8 mile race here as my second trail race in recent years (I ran cross country in junior high school and began running again in 2009), and remember the trail being unrelenting and mentally draining. That 8 mile race consisted of only one of the five laps I planned on running on December 7th.


At race time I had no intentions of quitting, my plan was to finish then immediately get to my work Christmas party to rehydrate and injest all the calories I expended at the Fells. The start was a little cool, probably 25-30 degrees, but not windy which made the clothing choices difficult. I discussed planned lap times with Eric Ahern and Jeff List before the race and decided to try to stick with Eric and Ryan Welts for as long as I could. This turned out to be only four miles as they were running a little faster than I felt comfortable with. I ended up dropping back before the first aid station (4.5mi) and running at a pace that I felt I could hold for the entire race.


From the first aid station on, I ran the majority of the race alone sometimes crossing paths with people going in the opposite direction. I ran the first loop in 1:15 and the second loop in 1:20 and felt great. I was halfway through the third lap, around mile 20, when I started to doubt my decision to run the race. My legs were not starting to get tired yet, just some minor fatigue, but my mental state just wasn't in it. I have never felt so much like quitting a race before and once I returned to my car after the third loop at approximately mile 24, I decided my day was done. I ended up finishing my third lap in 1:30 and by that time was not far ahead of the number 4 runner - whom I saw come in and leave the aid station quickly. I have run plenty of loop courses before, but I don't know if this decision came because I did not have my heart fully into this race or because my training wasn't going as well as in the fall (short layoff and I had yet to get some speed back). Whatever it was, I am not doubting my decision to quit, but it still bothers me that I couldn't finish what I set out to do that day.


I am using this as a learning experience and at least I was able to get a good long run in for the day. I had a fun time out on the trails and the race was organized perfectly by the Trail Animals Running Club (TARC). I was down on myself at first because I was still in third place after three laps, and began receiving messages from my wife and Justin either teasing me (my wife) or trying to talk me into getting back out there, but I had already made my mind up. I decided to take a little time off after the race and prepare for a comeback at the GAC Fat Ass 50k course in January. I figured this would be a good goal for a redemption race, another loop course that I have run once before and hopefully I could improve on my time from last year.

All the organizers and volunteers did a great job and provided everyone with an excuse to get out on the trails for many hours through their support. It was a great race and I will definitely be back to finish the 40 mile distance next year.

Here's some photos from some points along the trail: 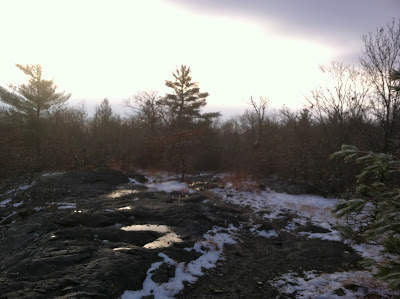 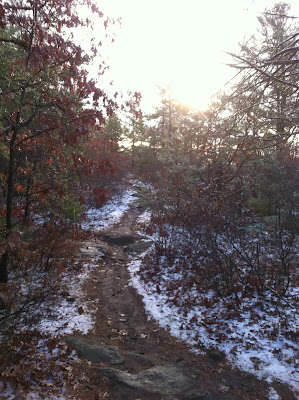 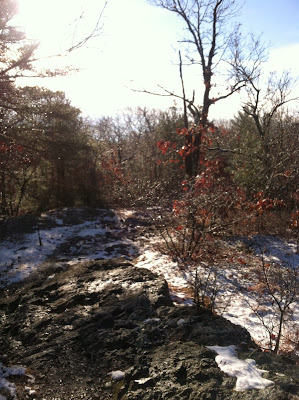 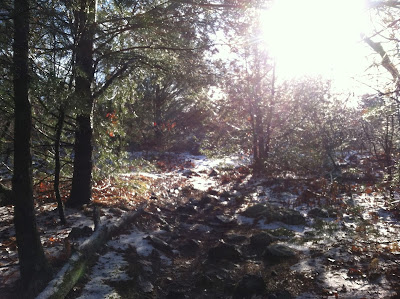